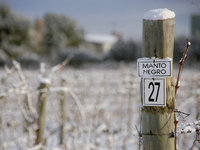 The labels of our Ses Nines wines depict our mother as a child skipping rope on the main square of her hometown, Consell; a village with a winemaking tradition in the area of the Raiguer.  This region suffered the devastating effects of phyloxera in the late nineteenth century and as a result, vine crops were replaced by almond trees.  However the wine producing tradition never disappeared among the peasants of the region and by the mid-twentieth century there was a revival of wine production thanks to the efforts of growers and winemakers of the island.

The little girl, our mother, came from one of those peasant families.  She inherited a small 35 year old vineyard in the town of Consell, planted exclusively with the autochthonous Manto Negro grapes, grown in the traditional "politxó" style (on regularly spaced wooden poles). We have engraved in our memory how she treasured this little plot and lovingly cared for these wines..

This cherished plot of land is the source of our dream to start a winery and make our own wines.  The idea was gaining strength and in 2004 the project to build Celler Tianna Negre began. From then on, we have endeavoured to expand from the initial plot inherited from our forefathers, gradually purchasing land in the region of Binissalem: 4 hectares in Biniagual, 10 hectares in Es Pinaret, 6 hectares in Son Colom, 10 hectares in Can Parrona, 6 hectares in Es Velar and 15 hectares in Son Boi. Our objective is to create special wines that would convey the essence of our island, and simultaneously show a renewed vision for the future, while combining Architecture, Nature, Character and quality.

As the building work of the winery was going to take a while, we produced the first vintages of “Ses Nines”, named in honour of our mother, in the facilities of a winemaker friend. With perseverance and enthusiasm, Celler Tianna Negre opened its doors to the harvest of September 2007. Its success is a result of to the synergy between its architecture and its wines.  This union maximizes the balance of tradition, modernity and environmental respect that we aim to represent.

Our wines reflect the characteristic strength of the autochthonous grapes with a modern approach.

Our work is based on our love for our land and our vineyards, and the impeccable quality found in all the stages of the wine making process.