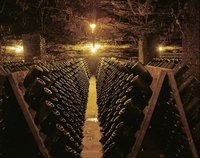 Francesc Sala Ferrés founded in 1861 the House Chamber, the first wine exporting brand in Sant Sadurní . His son, Joan Sala Tubella took the business and , after the wedding of his daughter Dolors Sala with Pere Ferrer Bosch Vivé , cava business started in 1914 .

Pere Ferrer Bosch was the son of the Freixeneda , XIII century estate located in Upper Penedès . The business was expanding and begin to appear the first label branded cava Freixenet Casa Sala . From the first time became exclusively develop cava , a natural sparkling wine , following the method used in Champagne ( France) in the eighteenth century. They set up their cellars in Sant Sadurní d' Anoia (Catalonia ) , a town located in the heart of the Penedès region . This region was already known since Roman times for the quality of the wines produced there.

In the twenties and thirties, the momentum of the founders and security in the quality of its products had sought notoriety for signature. They even started exports to situate in foreign markets Spanish influence and emerging markets at the time.

In this sense the first establishment in the United States (New Jersey) in 1935 . The Spanish civil war, first , and World War II , then slowed the development of the company . Nevertheless, the company launched in 1941 which , over time , become one of its flagship products , the cava Carta Nevada , and in 1974 the Black Lace cava , current leader in export in more than 140 countries.

In the seventies we could say that Freixenet is already a fully stable and firm with a clear mission to expand internationally brand. In the early seventies , with the brand Freixenet fully consolidated in the Spanish market, intensified efforts , never interrupted the other hand, to reach international markets. Was beginning an expansion that is not over and that would lead to mid 80 's the Freixenet Group the world leader of all sparkling wines made by the traditional method .

Around the same time , the company decides to start building your multinationalization wineries outside its borders on the one hand , as in the case of Gloria Ferrer in California, Wingara in Australia and many more in Spain and in other wine regions of Rioja reputation as , Ribera del Duero, Priorat , Montsant , ...

Currently the Freixenet Group remains a family business 100% and has 18 wineries in 7 countries on 3 continents.